We have spent the last 18 months fuelling our wanderlust by reminiscing about some of our favourite travel experiences. So, with the UK Government’s announcement last week, what better way to celebrate than to share these unique moments with you.

As the world reopens, we celebrate by sharing our top 10 wildlife encounters with you. If you want to learn more, get in touch, our team are waiting to craft your next adventure. 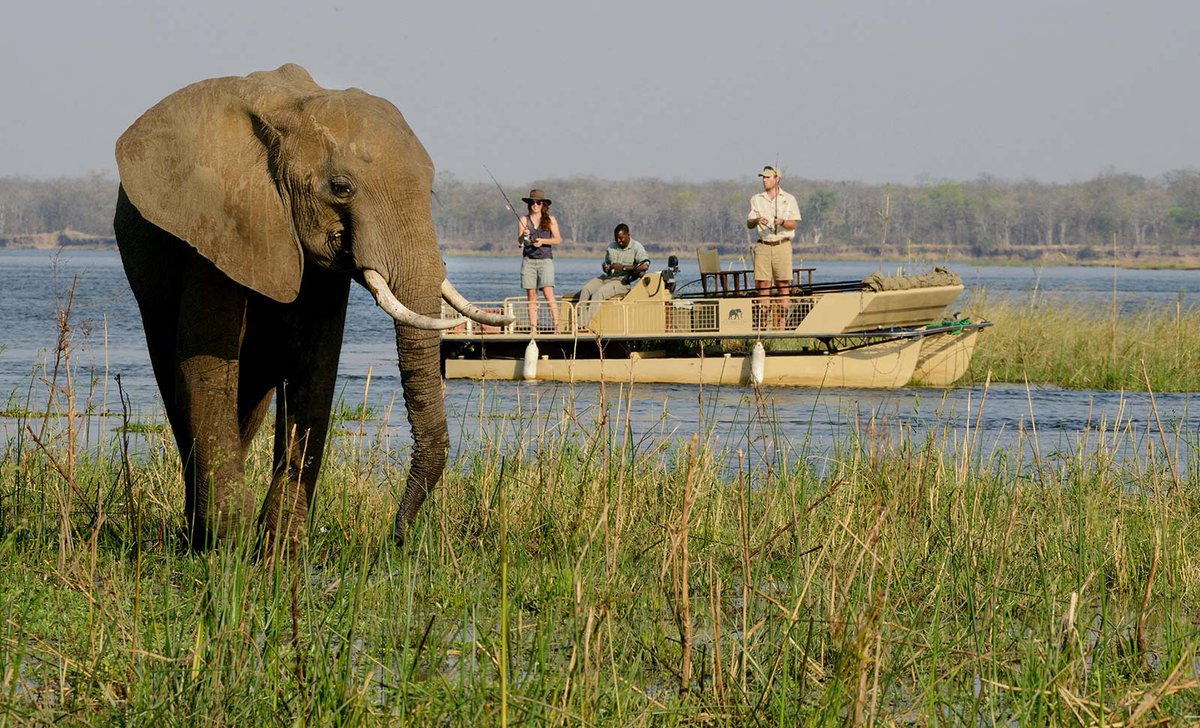 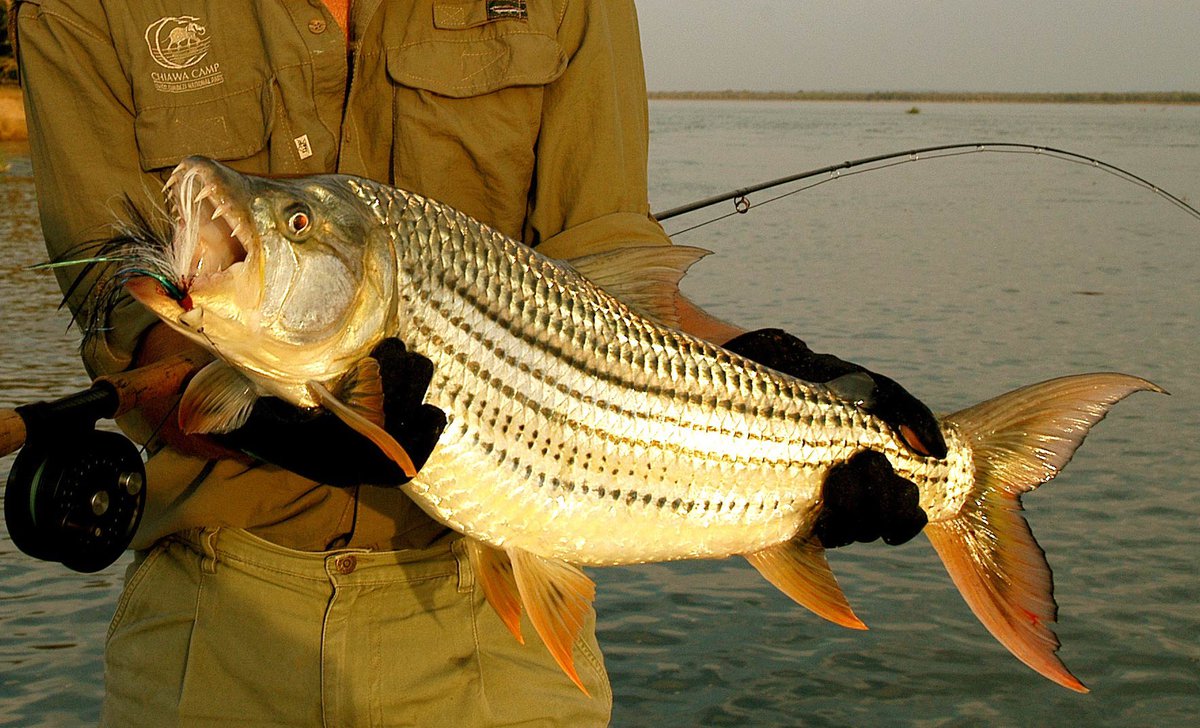 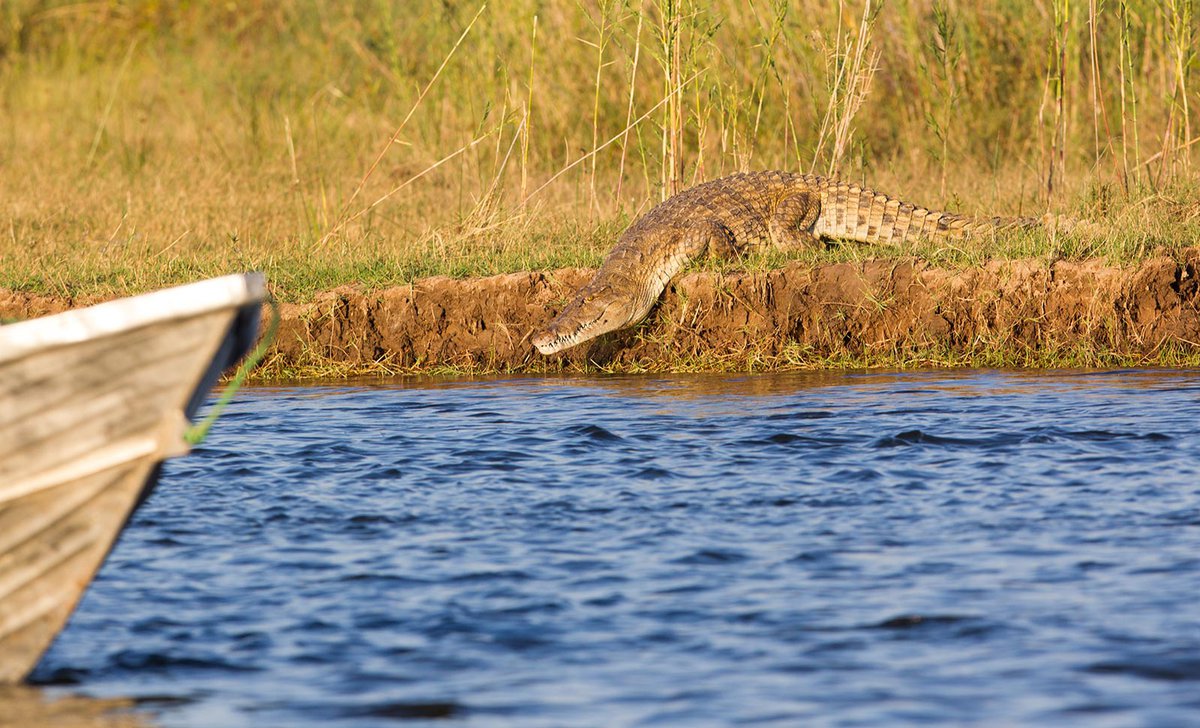 Tigerfishing on the Zambezi River alongside crocodiles, hippo and elephants, Lower Zambezi, Zambia

"For a novice fisherman with very little experience, and no desire to sit on a cold, windy river in England, the alternative of cruising down the Zambezi River in the sunshine, with cold drinks to hand, and a helpful guide ready to take care of all the technical aspects, is extremely appealing. The fact that I managed to actually catch a few tigerfish and that I was being silently observed by submerged hippo and inquisitive elephants was the icing on the cake!" 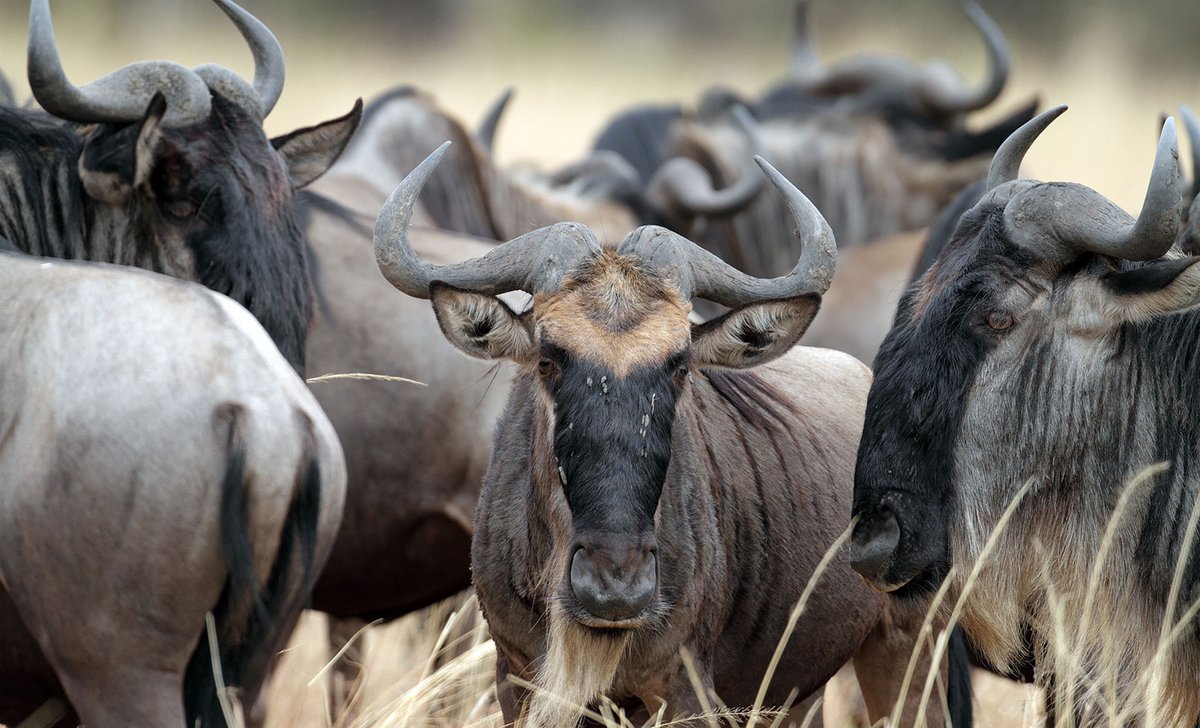 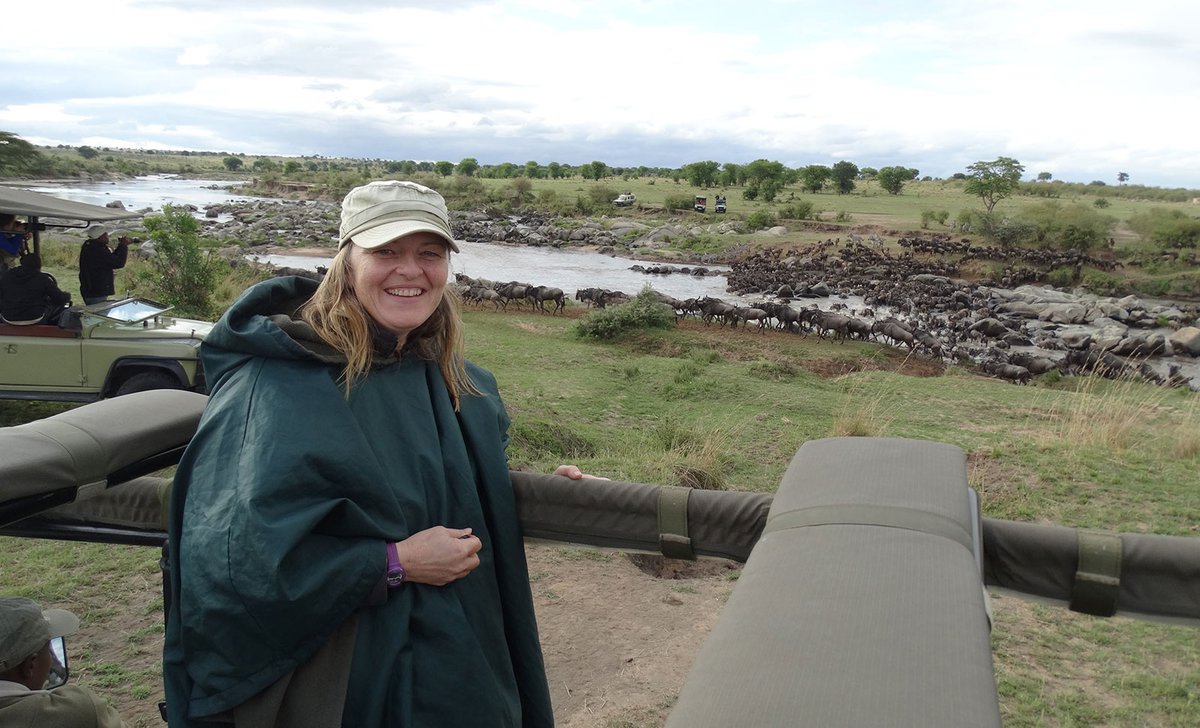 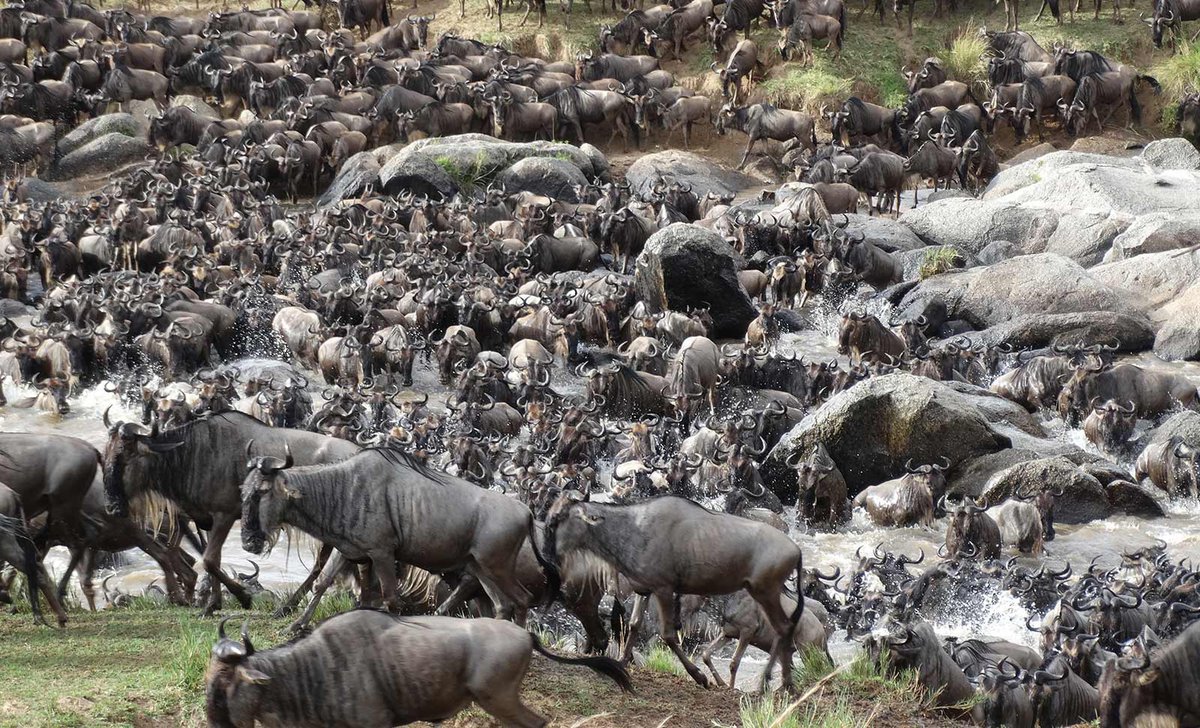 Marvelling at thousands of wildebeest crossing the Mara River in the northern Serengeti, Tanzania

"We had just set up our bush breakfast under an acacia tree, when my guide shouted “let’s go, they’re on the move!” With that, we jumped into our jeep and raced back to the banks of the Mara River. The first wildebeest to arrive looked tentatively at the water, but was pushed forward by the thousands more arriving and rushing down the banks behind, and that’s when the spectacular river crossing started. Stampeding gnus and zebras, leaping into the water, trampling crocs and dodging gnashing jaws (alas not all were lucky)! Best two hours of my life!" 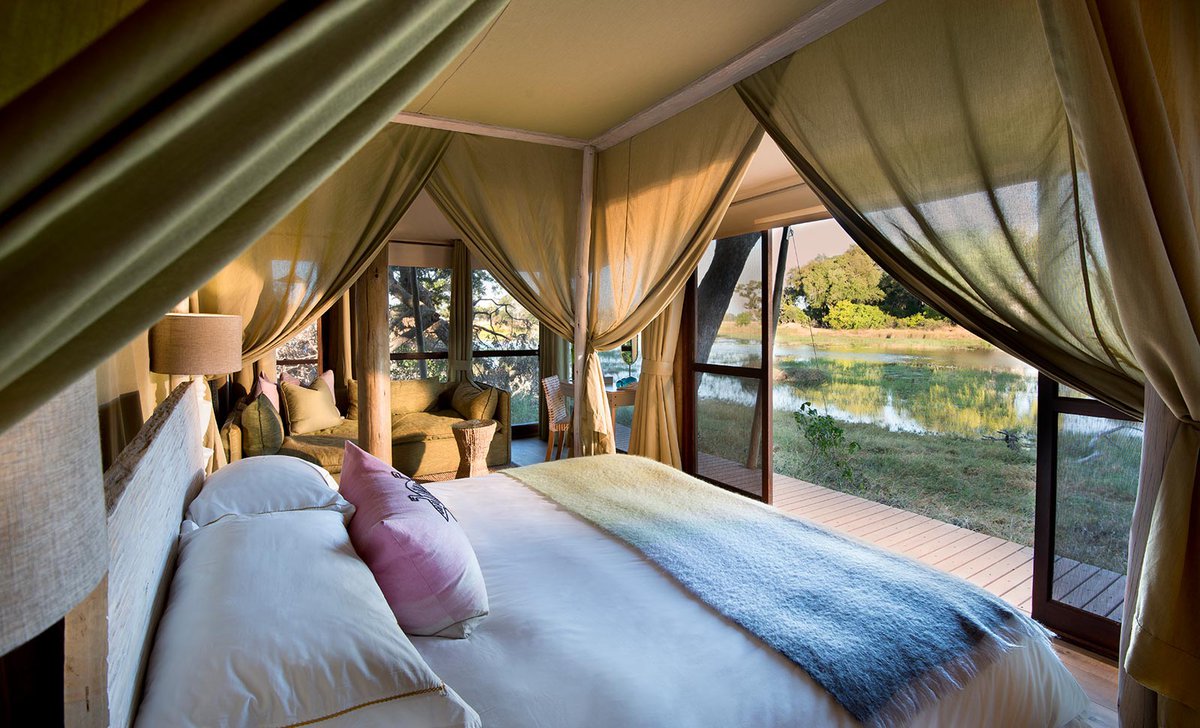 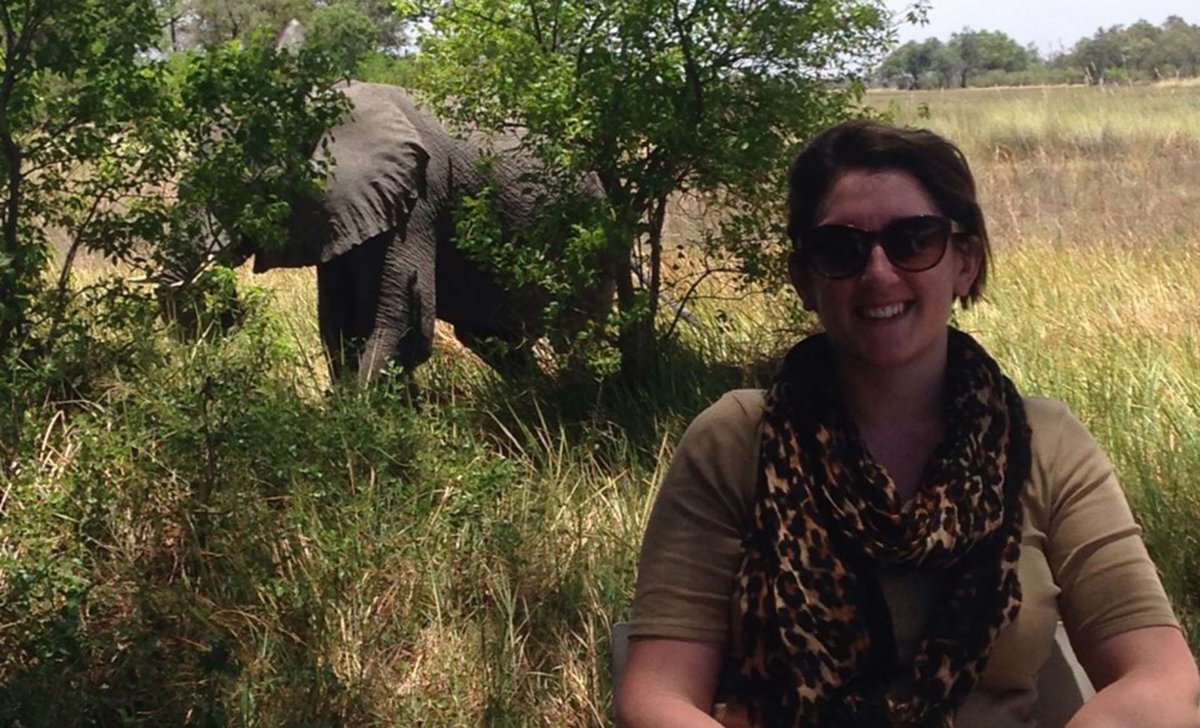 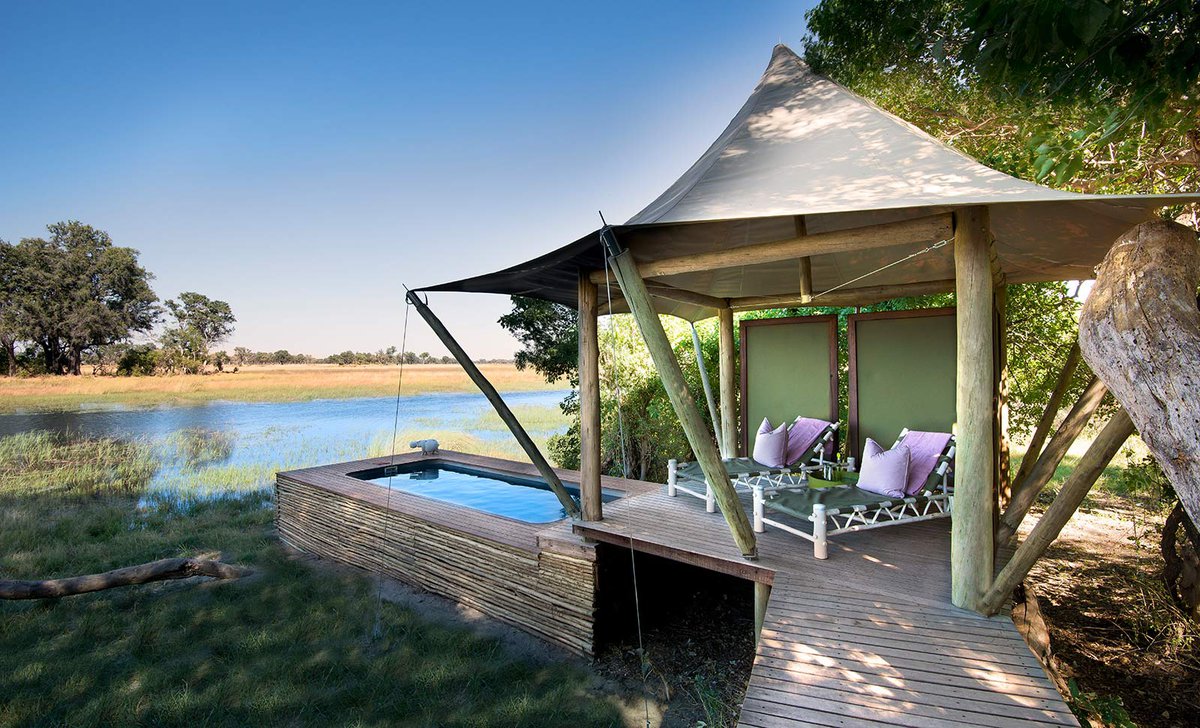 An elephant interrupts my shower in the Okavango Delta, Botswana

"I had just arrived at Xaranna in Botswana’s Okavango Delta. A shower with a view seemed the perfect way to start the afternoon. So, towel wrapped tightly around me, I made my way out onto the deck, but the Delta’s wildlife had other ideas as an elephant’s trunk appeared over the canvas in search of the refreshing waters in my private pool. I didn’t manage that shower, but for the next 30 minutes sat and watched as the gentle giant made its way slowly around the front of my suite and off into the forest beyond." 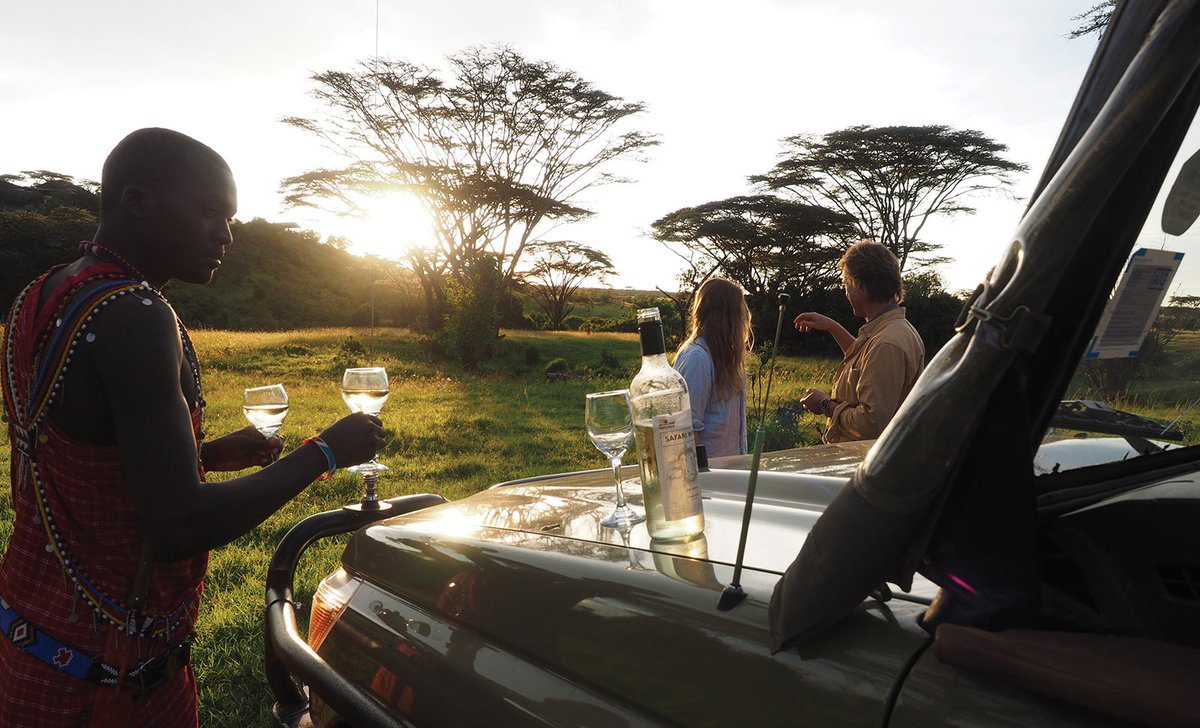 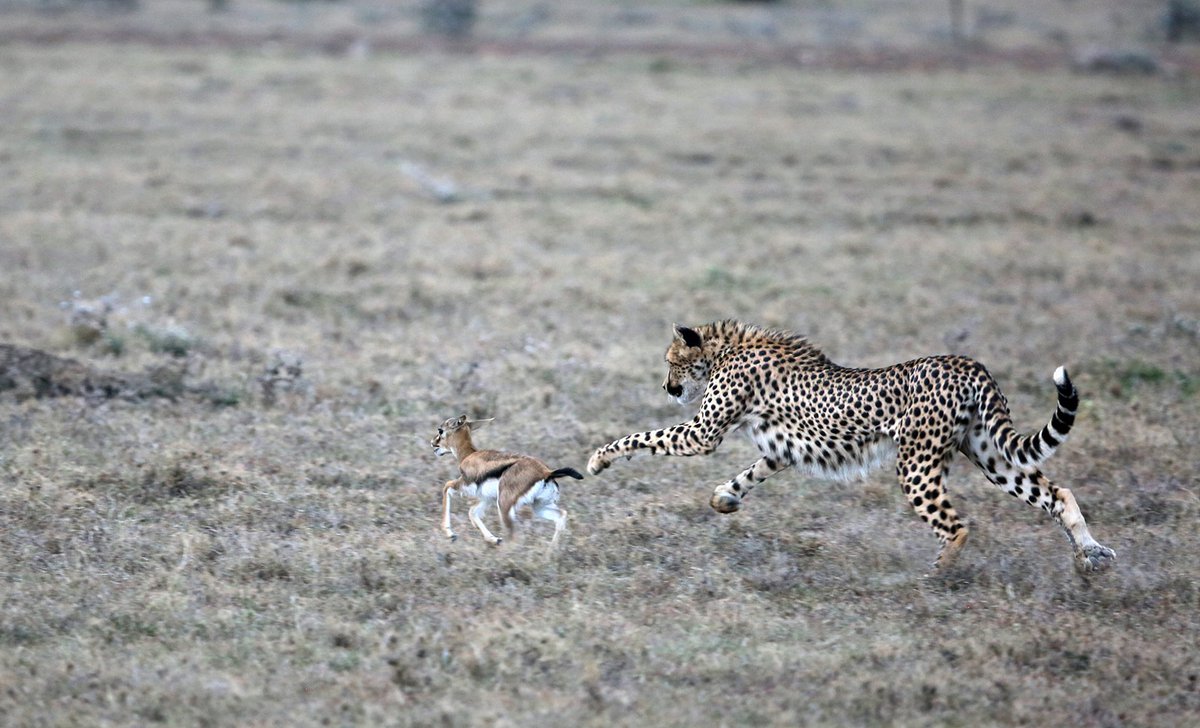 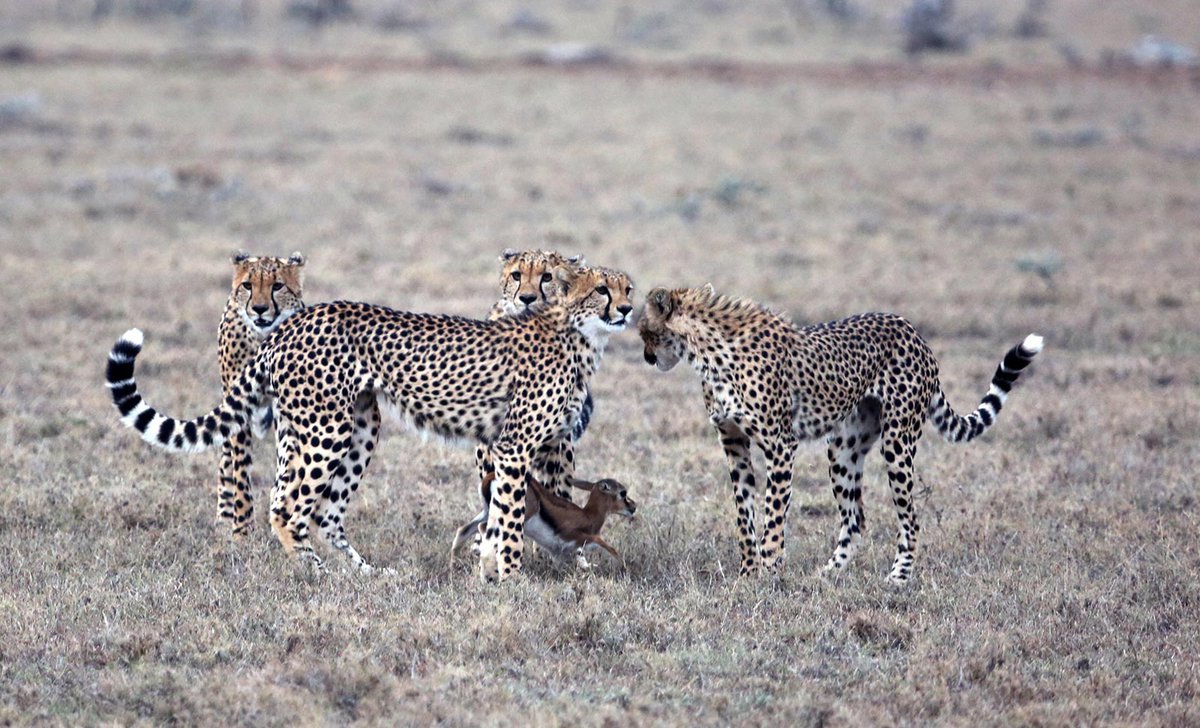 "We settled in front of five cheetah as they rested in the Mara, the sun setting on the horizon. Our guide handed us a cool gin and tonic, then something caught the attention of one of the cats. One by one they stood and faced the same direction, toward a herd of gazelle in the distance. Slowly they started to move, ‘Hold on to your drink!’ our guide instructed. Expertly he predicted the movement of the cheetah, we got ahead of them and watched as they sprinted into action. We were in the perfect spot for the take down, and I could see other vehicles in the distance whose guides weren’t quite as on the ball as mine. They missed all the action!" 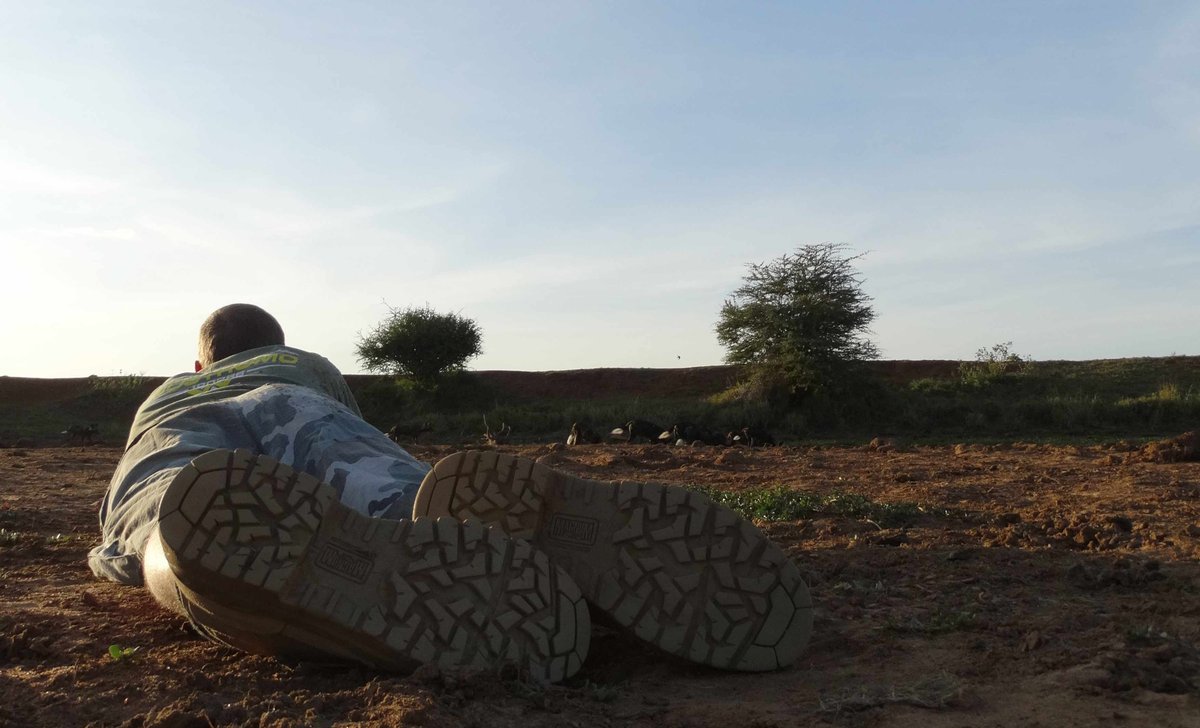 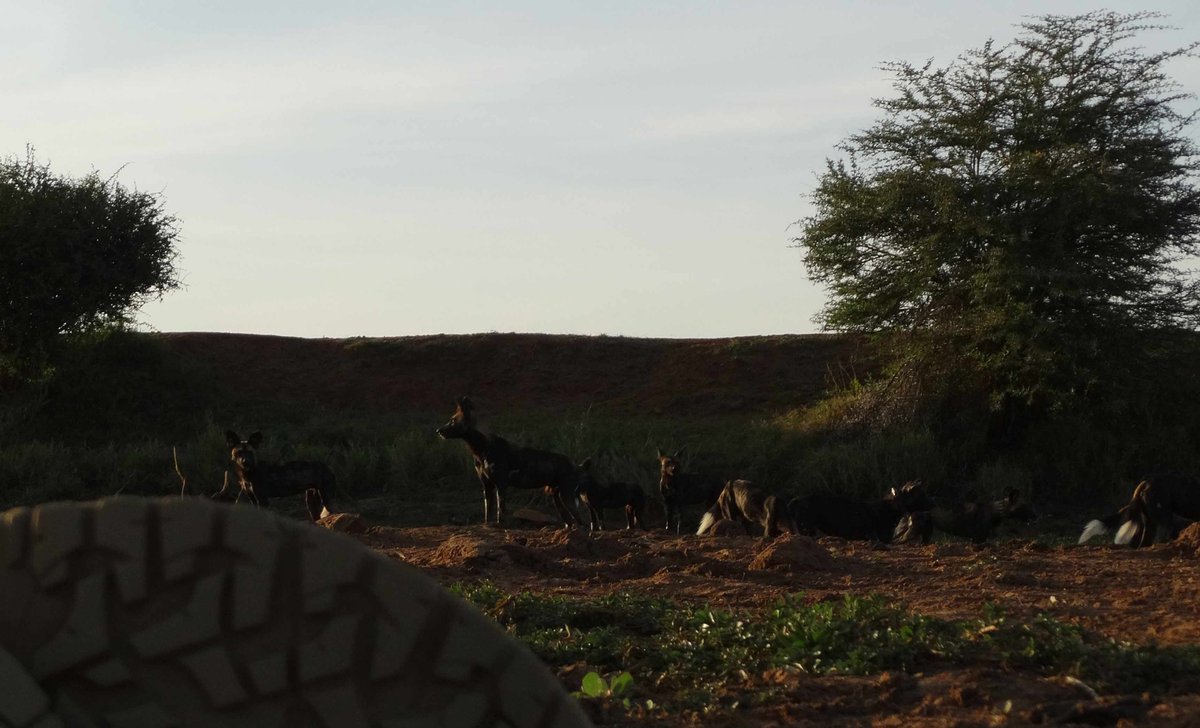 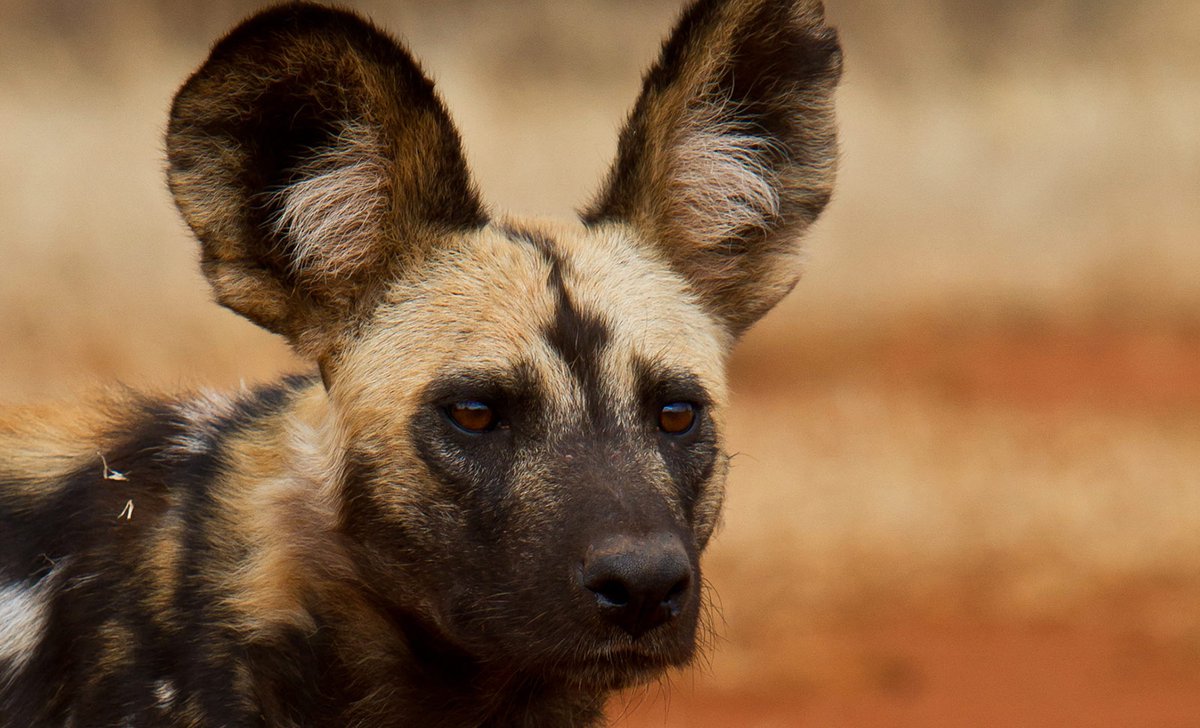 Lying flat on my stomach observing a pack of wild dogs drinking at a waterhole in Laikipia, Kenya

"In the central highlands of Kenya, I was on safari at Laikipia Wilderness, one of the few camps in the area that was part of a wild-dog study group. As part of this group, the guides were able to use tracking devices to help with sightings and research. Shortly after finding the dogs, they started to hunt, and successfully caught a small impala - amazing! Our guide, knowing this pack well, then raced us ahead to one of their favourite watering holes. We jumped out and lay flat on the ground and within minutes, the whole pack, still with blood on their faces, ran past us to drink!" 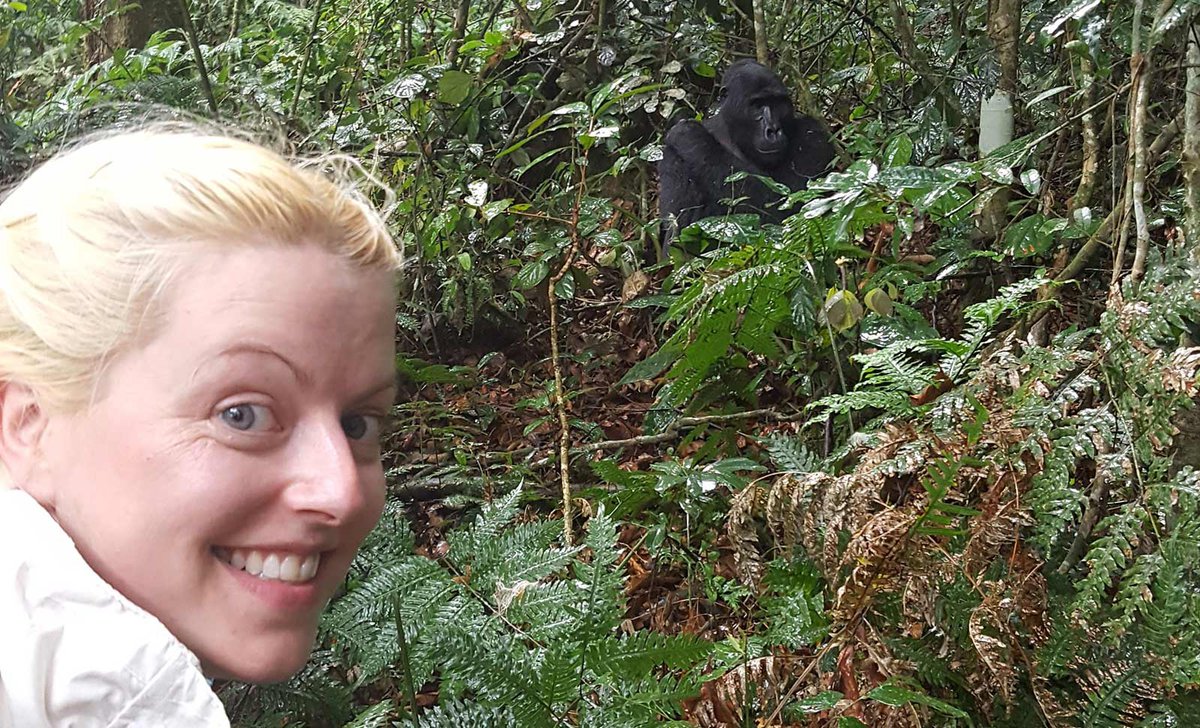 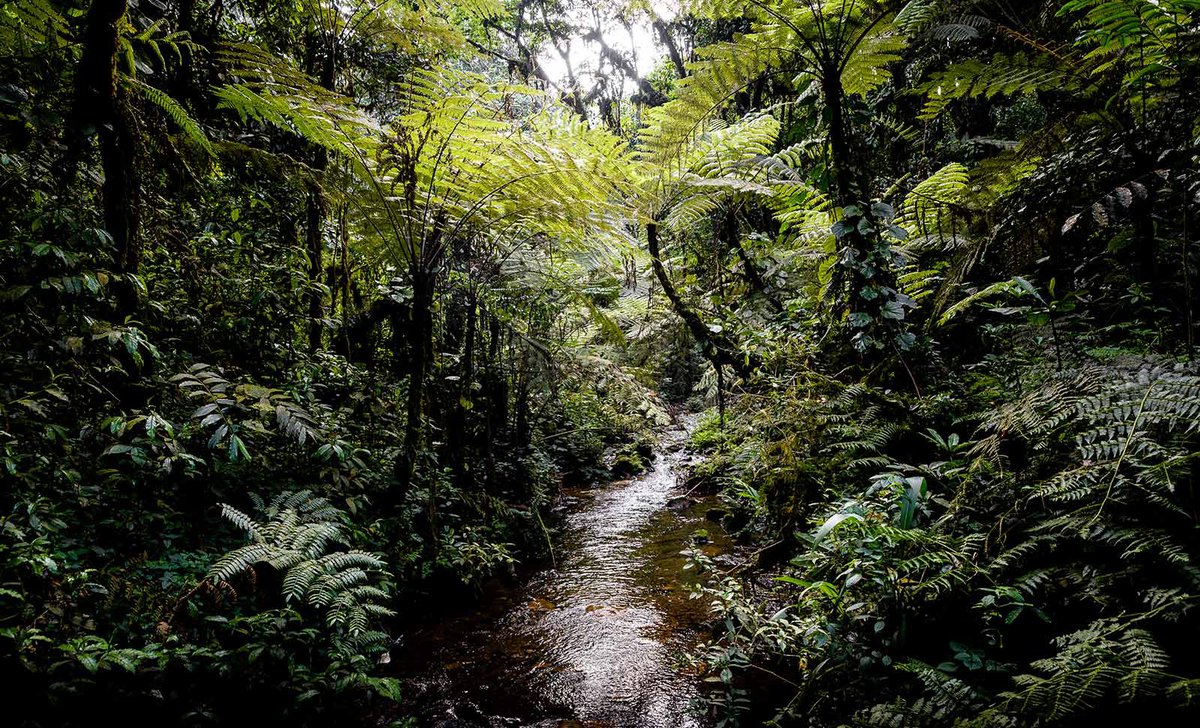 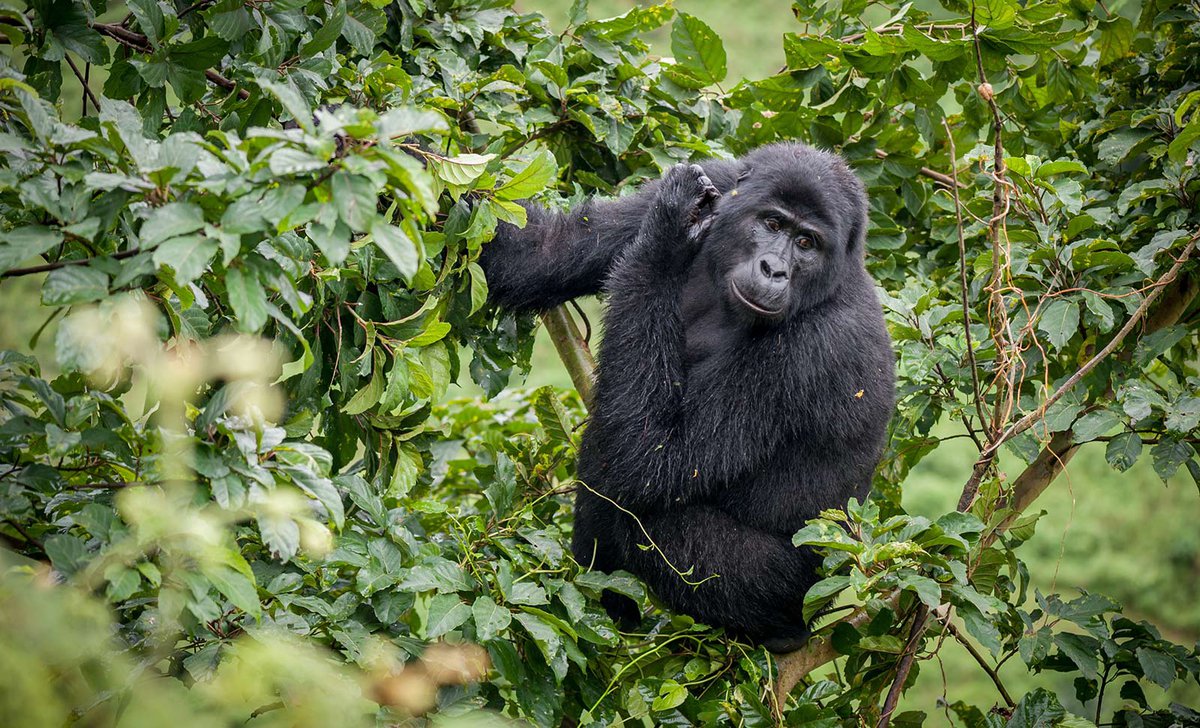 "Our trek was long but incredibly rewarding. Local porters assisted us, helping to navigate the more challenging areas and taking photos along the way. After five hours, my porter turned to me ‘Do you want to see a gorilla?’ he said and pointed ahead at the top of the trees. I spotted them, balls of dark fur inexplicably balanced in the branches. We got closer, the Silverback descended and then it was raining gorillas, one by one the family of 17 slid down the trees all around us. We followed them through the forest until they settled under some bushes. The next hour was magical, watching them play, groom, swing on vines and interact with one another. Of all the wildlife encounters that are possible around the world, nothing compares to seeing mountain gorillas. The vulnerability of being on foot within a few feet of them is breath-taking." 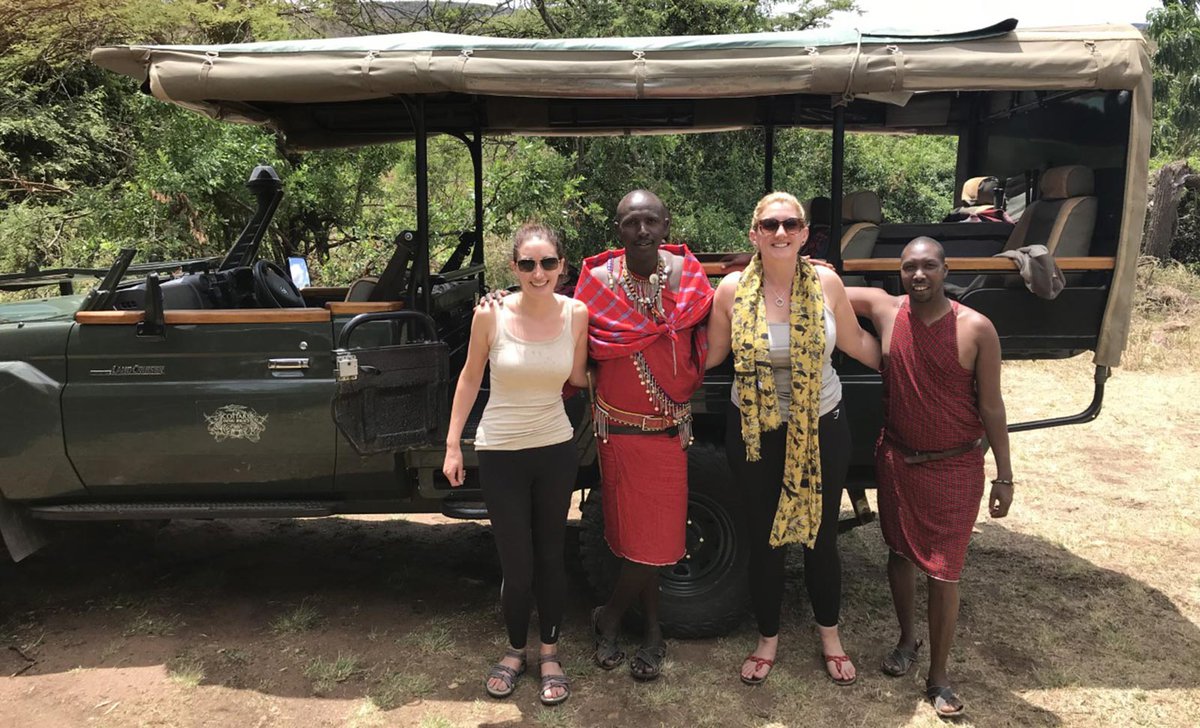 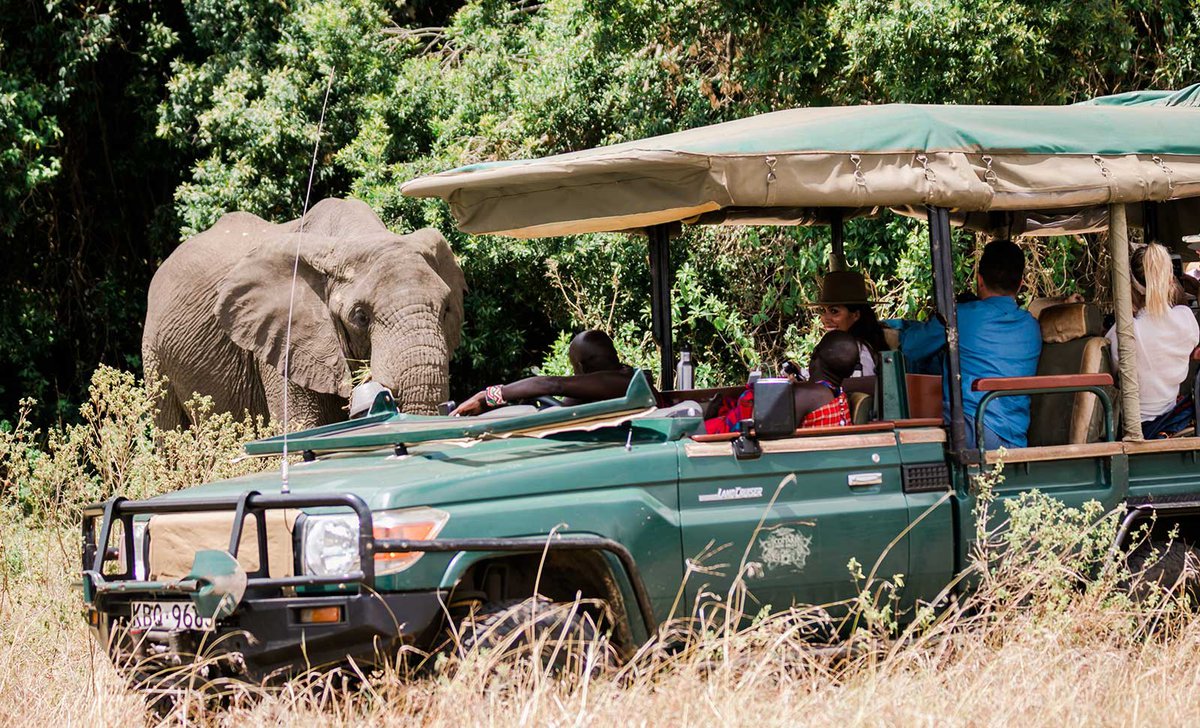 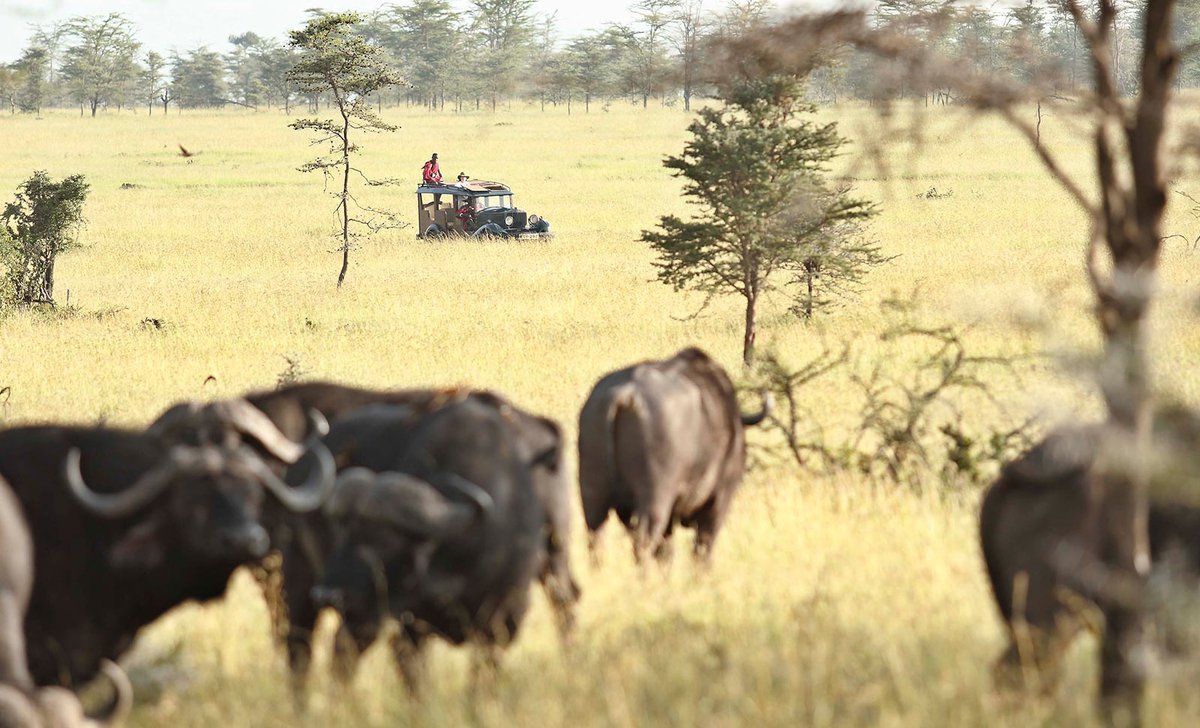 The Big Five - all in a morning’s work in the Masai Mara, Kenya

"This is a picture of the dream team. From it’s private location in the south-eastern corner of the Masai Mara, Cottars 1920s Camp offers an exclusive safari. What I wasn’t expecting was to spot the Big Five on my first morning's game drive. A herd of elephant browsing around our vehicle was followed by a lazy pride of lion. Our breakfast stop atop a rocky kopje saw a rhino appear from behind a nearby bush. Setting off again, just minutes later “You hear that, it’s a leopard”, our guide announced. I confess I was skeptical, but sure enough there she was, sitting on a fresh kill. To finish the list, a herd of buffalo dutifully appeared as we headed back to camp. What a morning!" 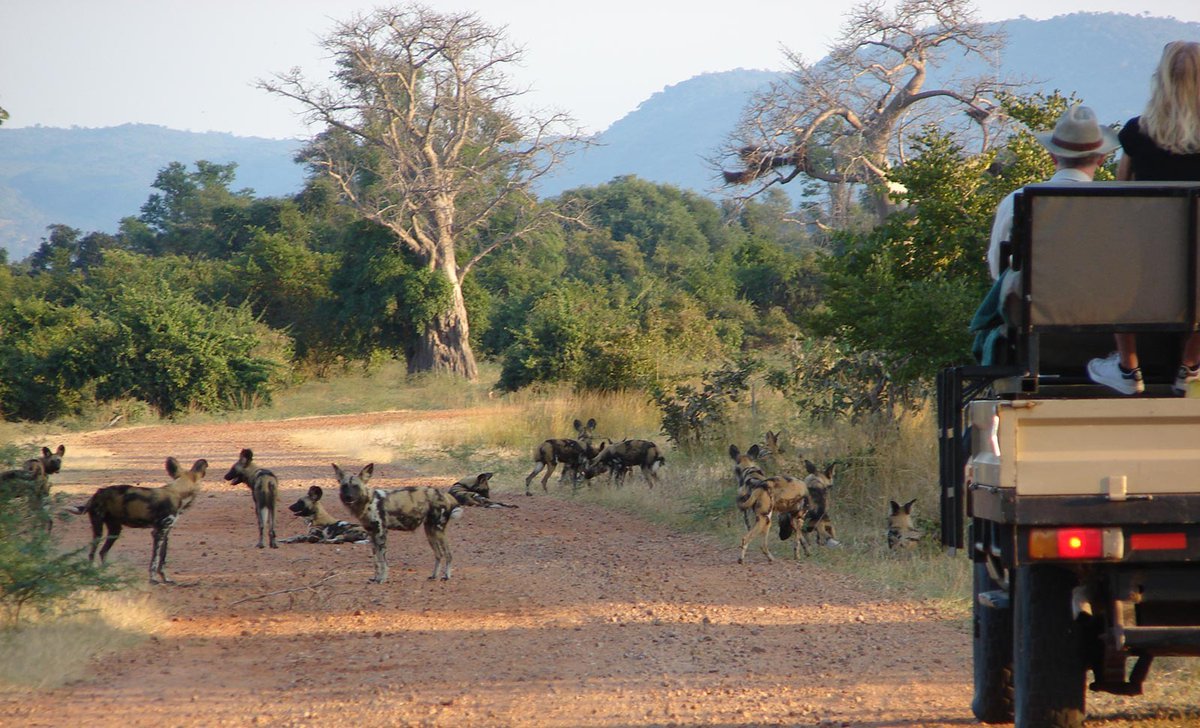 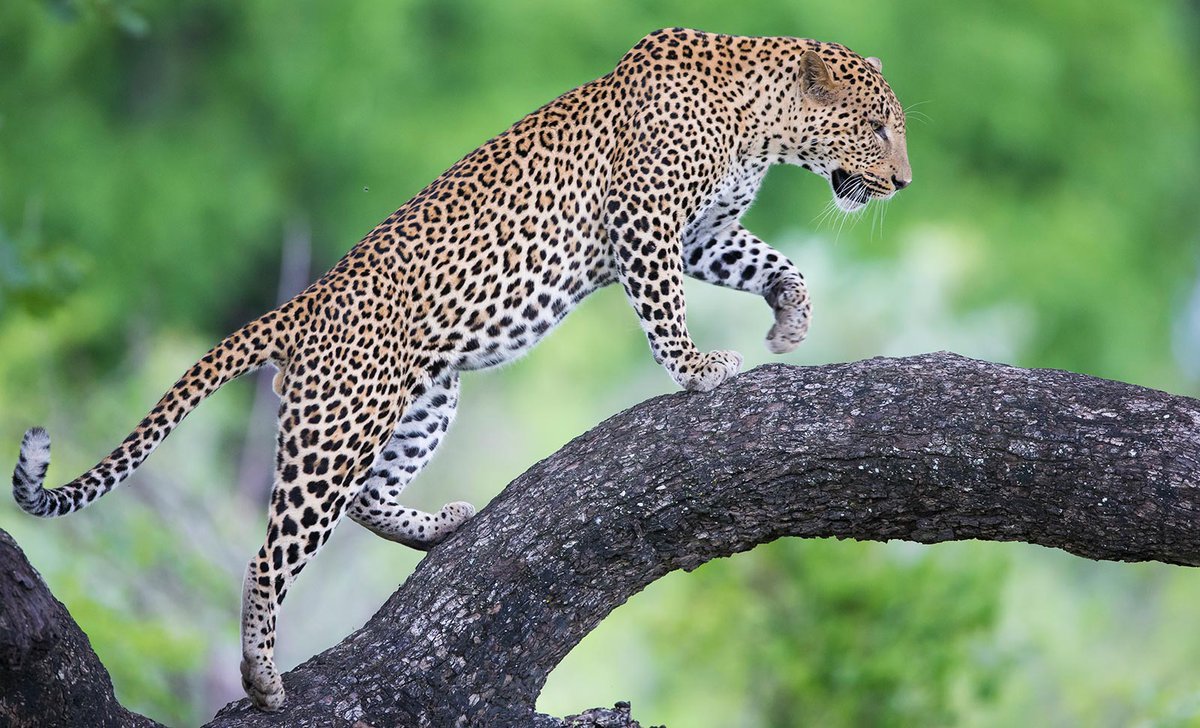 Seeing a female leopard and her two cubs lose their prey to a pack of wild dogs, South Luangwa, Zambia

"We were on an early evening game-drive, congratulating our guide for finding such a fantastic sighting of a female leopard with her two cubs feasting on a kill. We had been watching for about an hour, the sun had set and we decided it was time to move on. As our guide started the engine, an impala jumped at high speed over the the jeep’s bonnet. Suddenly there were more, lots more, and the herd was being chased by a pack of wild dog! The dogs managed to catch an impala just metres from us, but then noticed the leopard! The dogs released their prey and went for the leopard family. The two leopard cubs were chased up a tree, but the female hung onto her catch until she was outnumbered by the dogs! It was utter mayhem and totally thrilling and all over in about five minutes!" 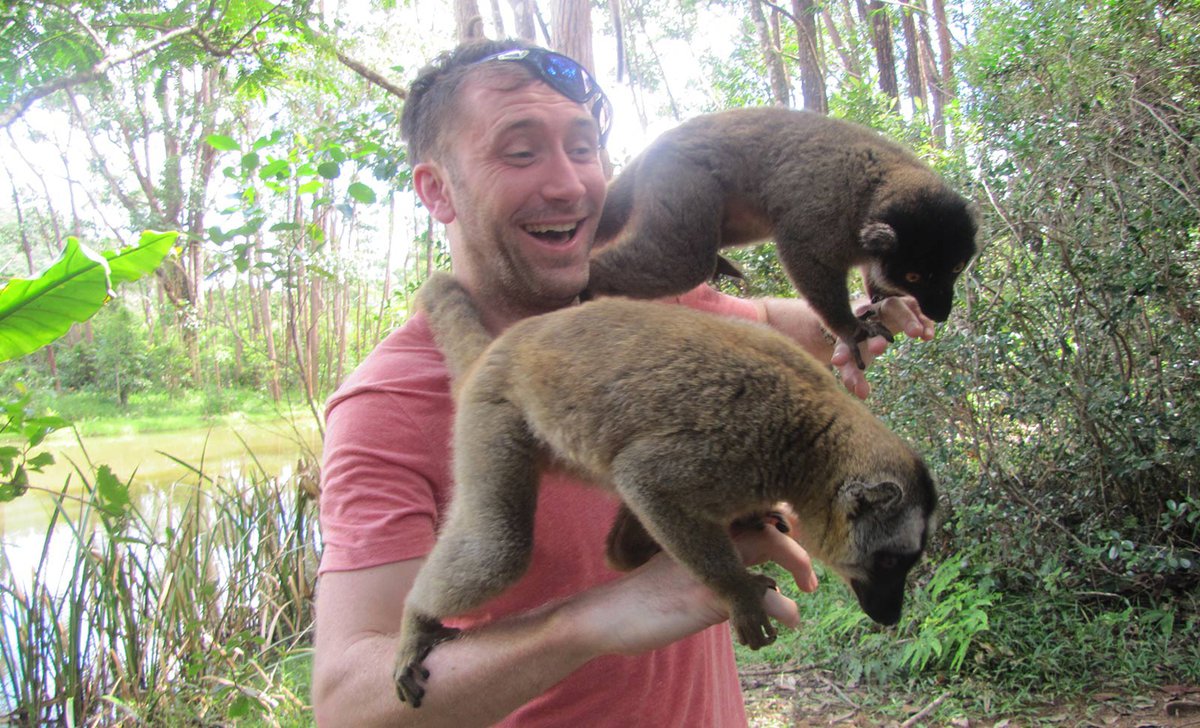 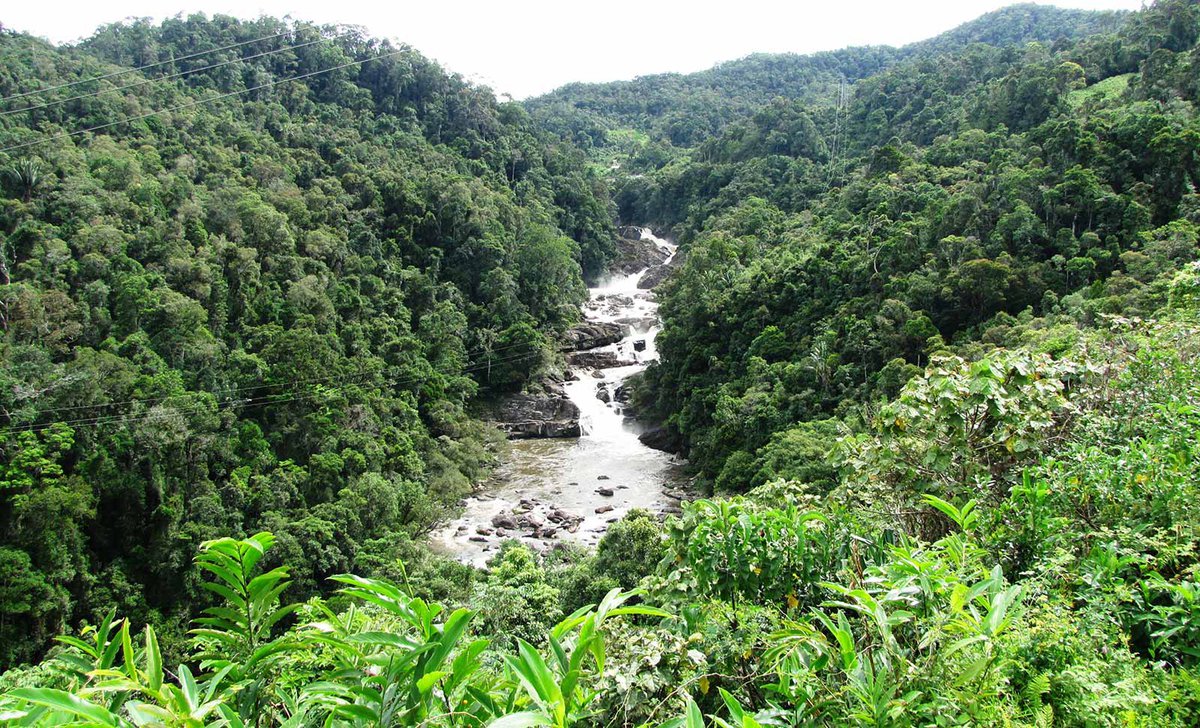 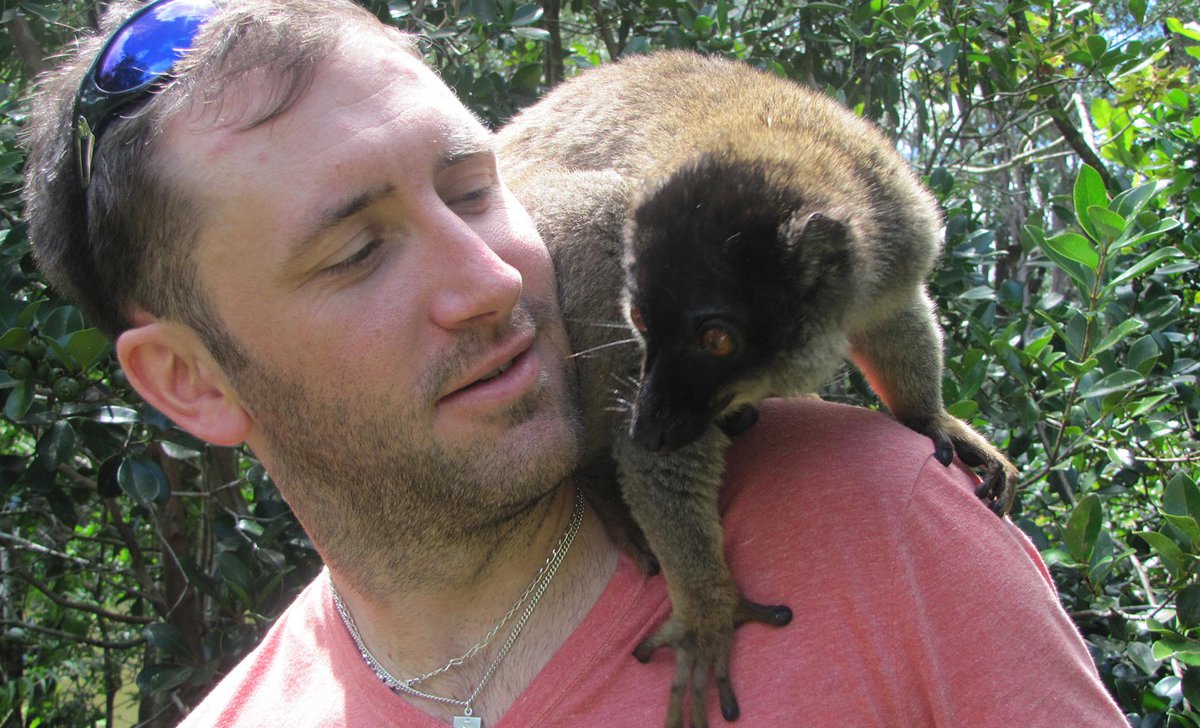 Being a climbing post for lemur at Vakona Forest Lodge, Madagascar

"Lemurs are ubiquitous and unique to Madagascar, and in almost all the rainforests and jungles you will come across these simian-like creatures, some as small as a mouse, others bigger than dogs, all of them fascinating. In the private island reserve attached to delightful Vakona Forest Lodge in the eastern highlands, a number of different lemur species have become habituated to human presence and walking among them quickly attracts their attention. Their predilection for using human heads and shoulders as look-out posts and climbing frames led to an experience like no other as three or four of them jumped from tree to me and back again while my chuckling guide tried to take photographs of me with my new friends!" 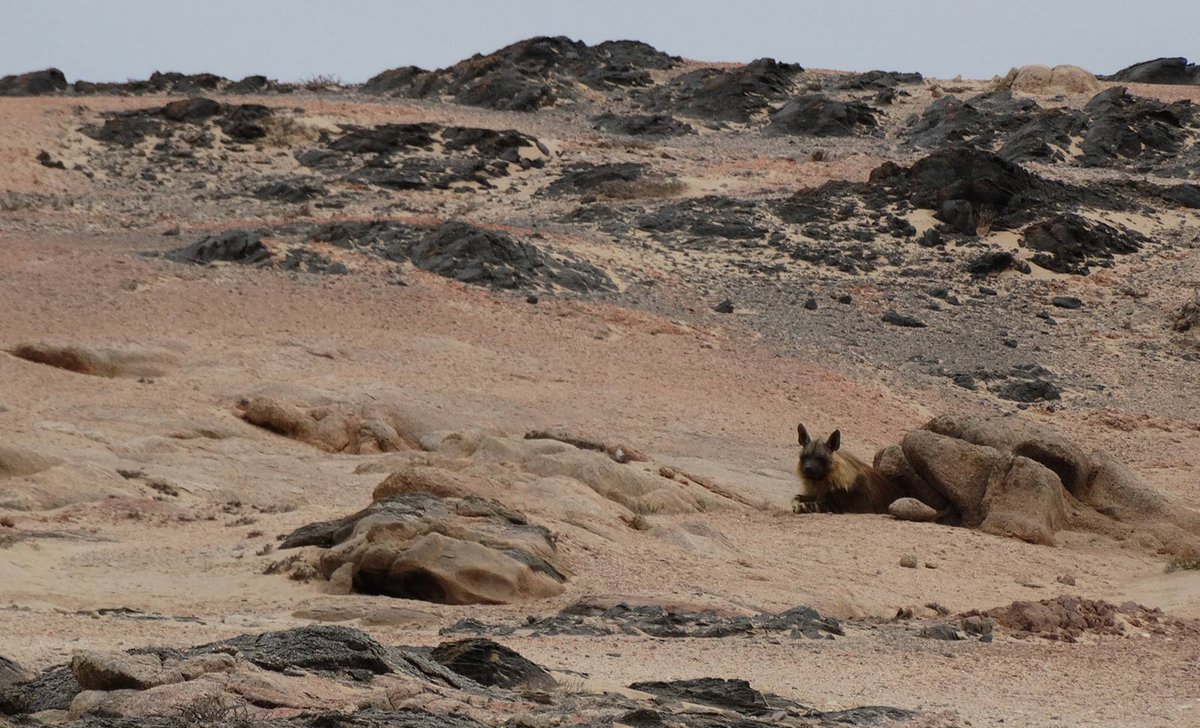 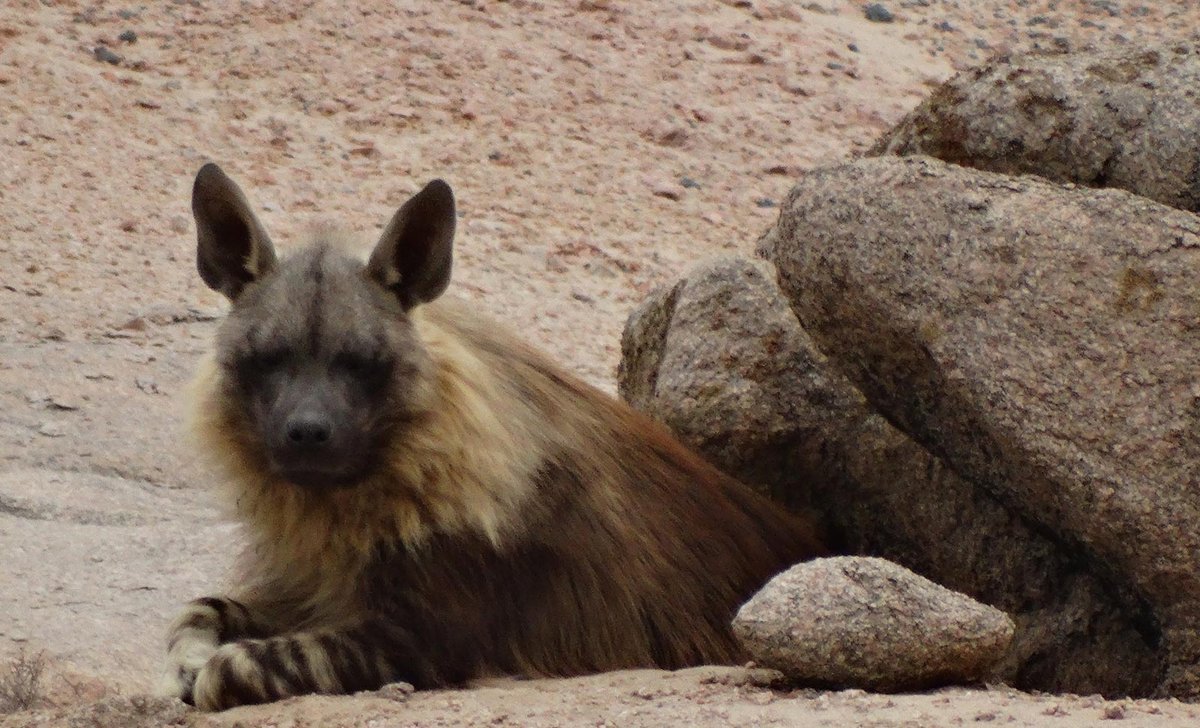 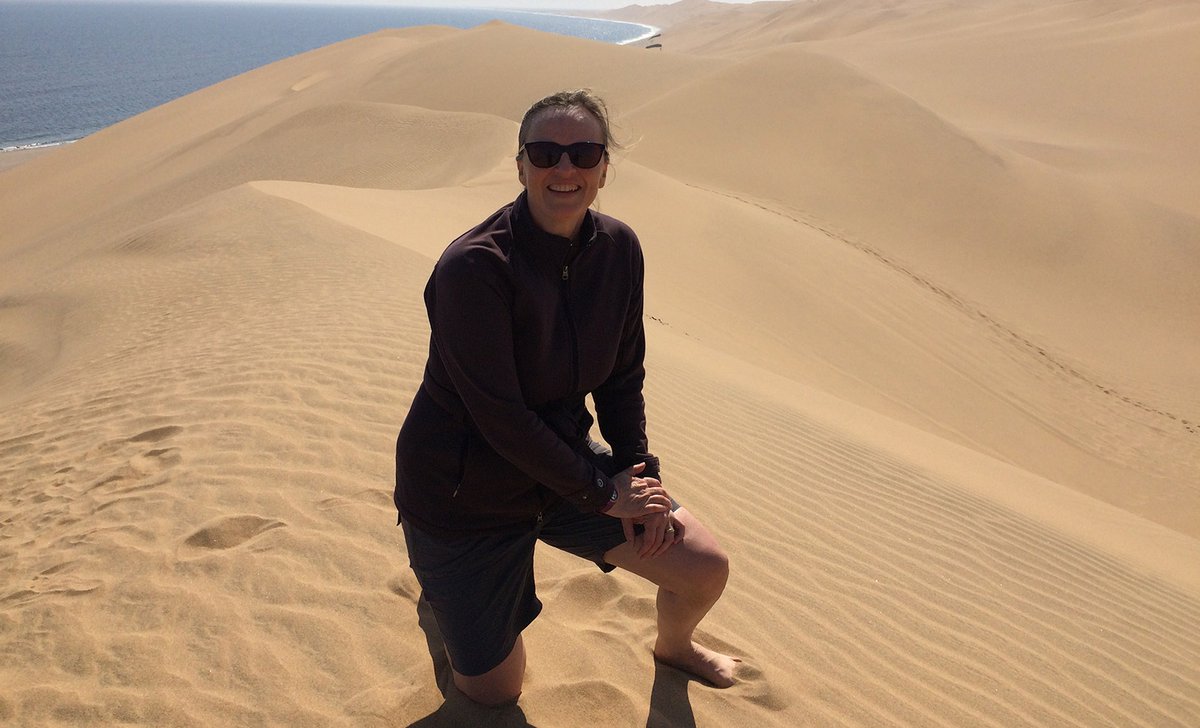 A momentary glimpse of a Brown Hyena along the Skeleton Coast, Namibia

"Namibia’s Skeleton Coast is one of the remotest places in Africa, known for its rugged coastline, immense sand dunes and deep canyons. It is also known for its changeable weather and atmospheric mist that rolls in across the ocean. The landscape was austere, but stunning and our time was incredible. Our guide knew we had been desperately hoping to see a brown hyena (as yet to no avail) but on our leaving day as we approached Mowe Bay, there sitting under a boulder was our brown hyena!"