A HOLIDAY NONE OF US WILL FORGET

The Hunter family got in touch with us recently to tell us all about their favourite family holiday to Africa. When they called us to enquire, they explained that they wanted an unforgettable family adventure out in the wilds of Africa. We chose Chongwe River House in Zambia's Lower Zambezi where the family could enjoy varied activities, see lots of wildlife and indulge on their holiday. Nicole Hunter wrote a lovely piece on her blog, Go Far Grow Close, where she shared her experience in depth and which we hope you will enjoy reading a snippet of below.
“Overall, it was a magical experience.

My children were 17, 13, 11 and 9 years old. We spent three weeks visiting South Africa, Swaziland and Zambia. The last seven days were spent at Chongwe River House in Zambia. Without knowing it, we had kept the best for last. This is why.

We were met at the airport and driven approximately 40 minutes to the House by an oversized open air safari jeep. There weren’t any roads, so I’m still unsure how we found our way. Animals were everywhere. And so it began…

The house was both fantastic and fantastical. The architecture was a blend of Gaudi and Disney. Walls were curved, windows were irregularly shaped, and ceilings undulated. The front door was the only door in the whole house. There wasn’t a pane of glass on any of the windows, and there simply wasn’t a back wall along the whole width of the house.

Most days, there were three or four warthogs who grazed on the grass below the deck. Crocodiles, hippos and elephants came and went. Monkeys were everywhere.

We had our own naturalist guide and a driver who spent each day with us on every safari we took. The managers of the house coordinated all of our wishes, babysat our children if we chose to do an activity that wasn’t suitable for the younger ones, and made sure our dinner and drink choices were prepared. In other words, we were spoilt beyond anything that we had ever experienced in our lives and it was wonderful!

Chongwe River House offered six different kinds of safaris alone, each providing a distinct and memorable experience. Every day, we chose two of them. One typically started around dawn and ran the balance of the morning. The other was either in the late afternoon or evening, depending on the activity that was chosen. These were our options: 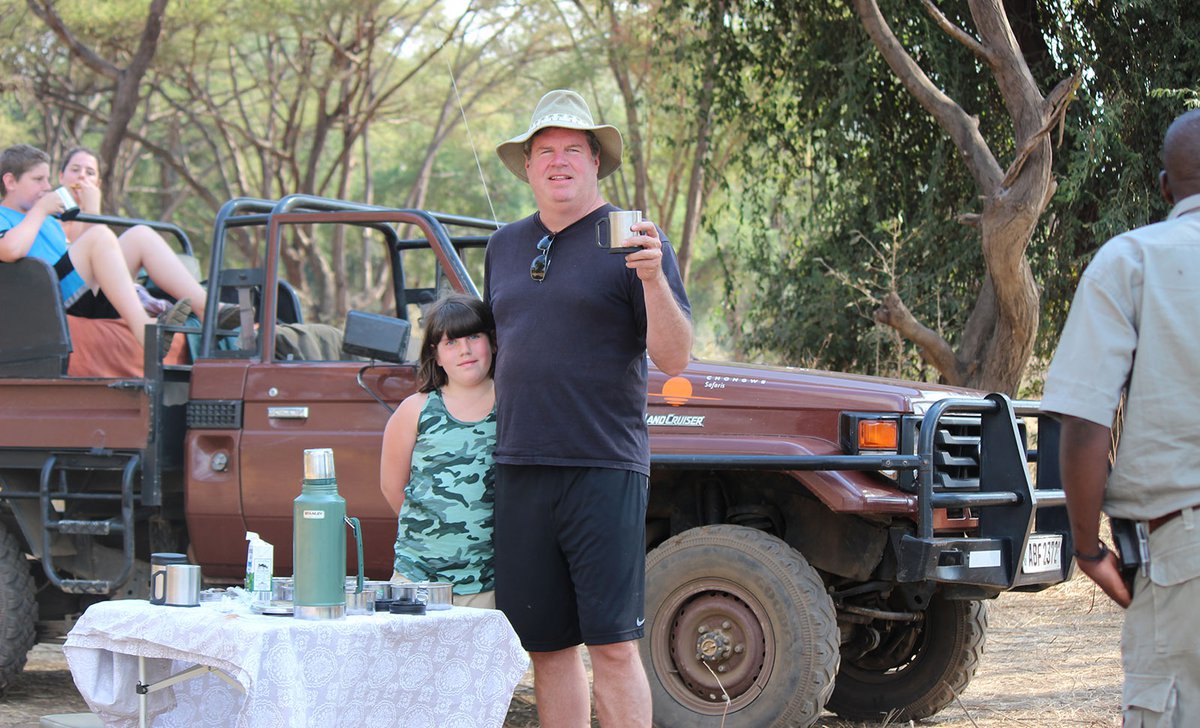 The first, game drives – a land based safari with an oversized open air jeep. There wasn’t a fence around the Chongwe River House or the National Park so in reality, the safari began as soon as we walked out of the front door of the house. Indeed, one day we found four or five lions around 5 minutes from our house.

The second option is to travel by speed boat from the back of the house along the Chongwe and Zambezi Rivers to the centre of the Lower Zambezi National Park.This was our favourite option. Without over-exaggerating, every time we stepped onto the boat and travelled along the rivers, we were dumbfounded by the beautiful scenery and animal life that we were watching. Hippos were everywhere, including mere feet from our boat, looking aggressive as we passed. Enormous majestic elephants were also everywhere. Chongwe River was extremely narrow so when we floated along it towards the Zambezi River, we were very close to the animals.

The third is a walking safari. We did this once. Our two youngest (9 and 11 year olds) were not allowed to go. Our two eldest joined us. This was a beautiful walk and we saw a few animals in the distance. They were keenly aware of our presence and kept close watch of us. However, many of the animals are naturally camouflaged or use the brush and trees to hide. We were very aware that we were surrounded by animals, even when our human senses couldn’t find them. It was an unbelievable feeling to know that with a wrong turn, we could have found ourselves face to face with an elephant, or a pride of lions eating its prey.

The fourth option is to take a canoe safari. One afternoon, my husband and I canoed down another tributary off of the Zambezi River. We each shared a canoe with a guide. Our 17 year old declined to come and our other three children were not allowed to do this. This was an extraordinary experience. Around us were crocodiles, hippos, and elephants, both on the shore and in the water. 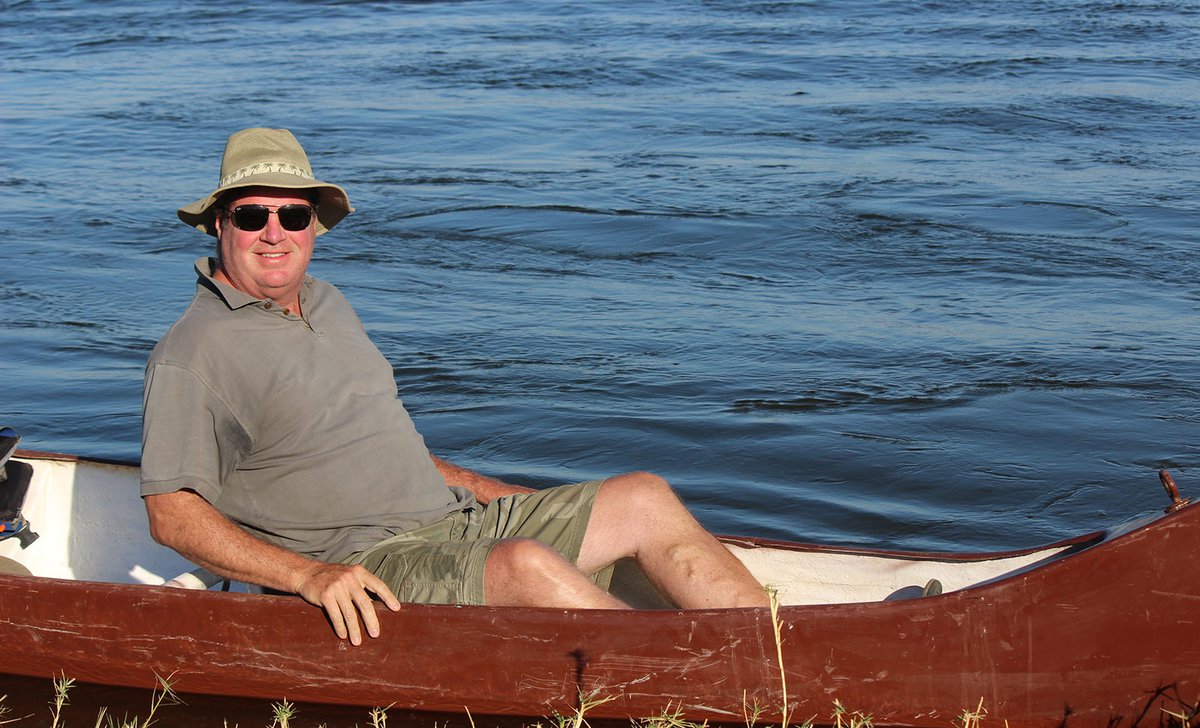 However, the scenery was beautiful and serene. My heart rate was racing, but it was a remarkable experience and I would do it again without hesitation.

Another of the options was a sunset cruise. This was similar to the speed boat safari except we would start this in the late afternoon. We would cruise down the Chongwe River to the Zambezi River. Cocktails were mixed and served. Hot hors d’oeuvres were passed around. We would watch the sunset while the animals prepared for the night. It was breathtaking.

The last and certainly not least, was a night safari. This was a very cool experience that we did a couple of times. In the late afternoon, we climbed into the jeep and headed to the National Park. Once darkness fell, we continued with our safari with only a large handheld spotlight for light. There were no lights in the National Park. Consequently, it was absolutely black at night.

The experience was exhilarating as we never knew what the spot light would uncover at a moment’s notice. We had to slam on the brakes a couple of times when we almost drove into a elephant or two. Then, we had to drive in reverse when the elephant wasn’t inclined to stop blocking our path and began flapping his ears warning us to retreat. We spotted a couple of animals that were only nocturnal, which was interesting.

However, by far the most amazing experience during these night safaris was the sky. When the spot light was turned off, and we stopped and looked into the sky, we could see thousands and thousands of stars, including the Milky Way. The sky was absolutely mesmerising. I could have gone on a night safari every night.

Participating in any African safari is an amazing privilege. There is nothing that I have experienced in the 50 countries that I have visited over the last 40 years that comes close to the rush of emotion and adrenaline that you feel when you come face to face with these animals.
Take this up a notch and you have our African safari experience at Chongwe River house in Zambia. Not only are you connecting with nature, and the ebb and flow of animal life in Africa; but you are also experiencing it in six different ways. Each way is completely different from the other. Yet, the sense of intimacy with the animals and sometimes, the sense of danger remains a constant, notwithstanding which type of safari you choose.

We would go back in a heart beat. In fact, we miss it desperately.
Enquire Now Book with Confidence
Trustpilot