Zimbabwe is once again open for adventurous travellers, showcasing its wonders to the world. Victoria Falls is Africa’s pre-eminent centre for active tourism, but don’t miss the well-stocked Mana Pools and Hwange National Parks, nor tranquil Lake Kariba.
Hwange

The Hwange National Park, formerly known as Wankie, was once home to the nomadic San Bushmen and the warrior king Mzilikazi. Founded by a young game ranger called Ted Davidson, it was declared a national park in 1929 and is now the largest game reserve in Zimbabwe - covering an area of 5,600 square miles (about the same size as Belgium). It lies to the west of Zimbabwe between Bulawayo and Victoria Falls, which is a mere two hours’ drive away. Hwange has a good infrastructure with roads, shops and even an airport, however it is not touristy and offers a fantastic wilderness experience.

Lying close to the edge of the Kalahari Desert, the region has little water with sparse, xerophile vegetation. It is a place of extreme contrasts. During the dry months the park is very inhospitable with crusted and cracked salt pan landscapes. The animals are helped by 60 man-made waterholes which provide them with much needed water until the rains arrive bringing new growth. Despite these harsh conditions the park is home to 105 species of animals, including 19 herbivores and eight carnivores. This protected area is also inhabited by one of the largest surviving groups of African wild dog and it is a bird lover’s paradise with over 400 species including 50 different types of raptor and huge numbers of the ground dwelling Kori Bustard. The elephant population has thrived in Hwange and the population exceeds that which is naturally supported in the area.

Hwange combines well with contrasting Victoria Falls offering superb game viewing with the thrills of the falls. It is also a great destination for horse riding safaris – being the first national park in Africa to allow riding.
Mana Pools

The Mana Pools National park is a wildlife conservation area covering the lower Zambezi River in Northern Zimbabwe, where the flood plains turn into a broad expanse of lakes after the rainy season. It takes its name from the Shona word meaning ‘four’ – which refers to the four large permanent pools formed by the meanderings of the Zambezi. The park has been declared a World Heritage Site based on its wildness and natural beauty – together with the huge diversity of mammals, bird species and aquatic life that inhabits the area.

The park, which stretches across an area of 770 square miles of Zambezi riverfront vegetation – saved in the early 80s by a hydro-electric scheme which would have flooded the area, is mainly accessible by foot. The landscape consists of islands and sandbanks fringed by dense baobab forests and rugged escarpment which is home to large herds of elephants that return to the same places every year.

Herds of buffalo and predators like lions, leopards and cheetah are also seen regularly and the rivers are teeming with Nile crocodile and hippo. The region was once inhabited by the densest populations of black rhino in the world but numbers have dwindled due to poaching which sadly continues, despite regular manned ground patrols. In contrast the birdlife is prolific with 380 species having been recorded including Livingstone’s fly catcher, white collared pratincole, banded snake eagle, yellow spotted nicator and the Nyassa lovebird.
Matobo National Park

The Matobo National Park lies 21 miles south of Bulawayo in southern Zimbabwe. It is a small accessible game park which contains some of the region’s most interesting scenery.

The park is situated in the Matobo Hills (meaning 'Bald Heads') - a range of domes, spires and balancing rock formations which have been formed out of the granite plateau through millions of years of erosion. The rock formations look like manmade sculptures, rather than naturally occurring phenomena. A good example is the 'Mother and child Kopje'. The surrounding land is communal with a small proportion of farmland.

The park has long been rhino territory and is well populated with black and white rhinoceros. Other inhabitants include wildebeest, eland, kudu, leopard, hyena, hippo, cheetah, giraffe, crocodiles, sable, and baboons. The birdlife is equally diverse with large concentrations of black eagles as well as fish eagle, pied crow, Egyptian geese, weavers, martial eagle and secretary bird. The black eagles are an incredibly common site – often seen riding the thermals, in search of prey or sitting on the kopjes. The rivers are teeming with fish and species such as bream, bass, catfish and bottle fish are common place.
Matusadona National Park

The Matusadona National Park is a game reserve situated along the southern shores of Lake Kariba in western Zimbabwe. It is a magnificent combination of flat plains and rugged mountain country which gets its name from the Matuzviadonha Hills – meaning 'falling dung'. It is thought that the inspiration for its name was the sight of elephants dropping dung balls as they struggled up the hills. The landscape is dotted with dead tree like sculptures which form an impressive skyline against a backdrop of spectacular watery sunsets.

Two thirds of the park is only accessible by foot and the best way to reach it is by boat from Kariba. It is one of the last remaining sanctuaries of the endangered black rhino and has the second largest concentration of lions in Africa.

Antelope, buffalo and swimming elephant herds are plentiful and birdlife includes storks, herons, flamingos and fish eagles. The lake is known for tiger fish that put up a good fight, many weighing in at a hefty 15kg. Kariba is also teeming with crocodiles which can usually be seen sunbathing along the shores at intervals of 200 metres. Most of the animals in the Matusadona National Park are from the Operation Noah project of 1959 - a time when Lake Kariba was flooded and the animals were relocated to the park over a five-year period.

The best time to visit the park is during the dry season from June to October when the animals migrate to the lake to drink and graze along its banks. The summer months from November to April bring intermittent rains and spectacular electrical storms creating a very hot and humid climate with oppressive temperatures. The park is a malaria free reserve.
Victoria Falls

Known as ‘Mosi-oa-Tunya’ or ‘The Smoke that Thunders’, Victoria Falls is undoubtedly one of the most spectacular waterfalls on earth. In a breathtaking display of power and beauty, millions of cubic metres of water from the mighty Zambezi River plummet into a gorge over 100 metres below to create massive columns of spray that can be seen from miles away.

Forming the border between Zambia and Zimbabwe, Victoria Falls is also known as the ‘Adventure Capital of Africa’, offering adventure-lovers a myriad of exciting activities to try, from the thrills and spills of white-water rafting to heart-stopping bridge jumps and gorge swings. Spend a day wandering the rainforest paths and viewing the magnificent wall of water from the numerous different viewpoints against a backdrop of chattering monkeys. Enjoy a once-in-a-lifetime experience and walk with lions in the wild or get up close and personal with the Nile crocodile on an adrenalin-rushing crocodile cage-diving experience.

The closest towns to the falls are Livingstone on the Zambian side and Victoria Falls Town on the Zimbabwe side, each offering a superb choice of five-star hotels and good restaurants – all of which can be arranged with our special Africa Exclusive touch. 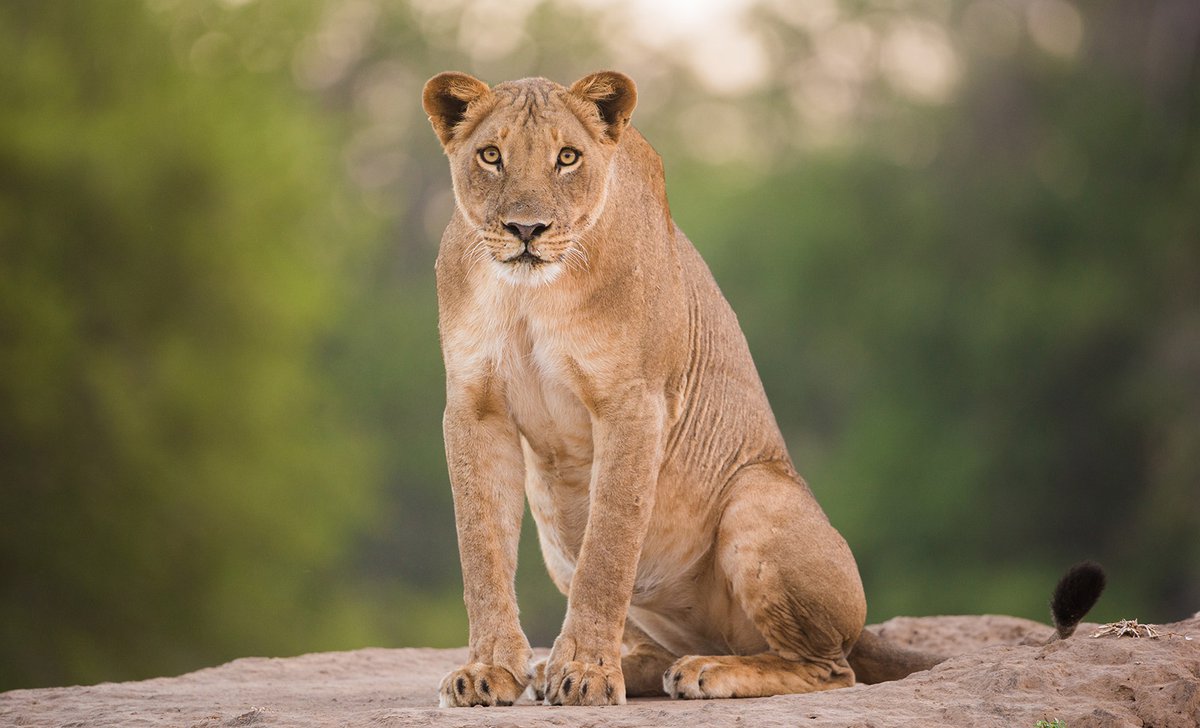 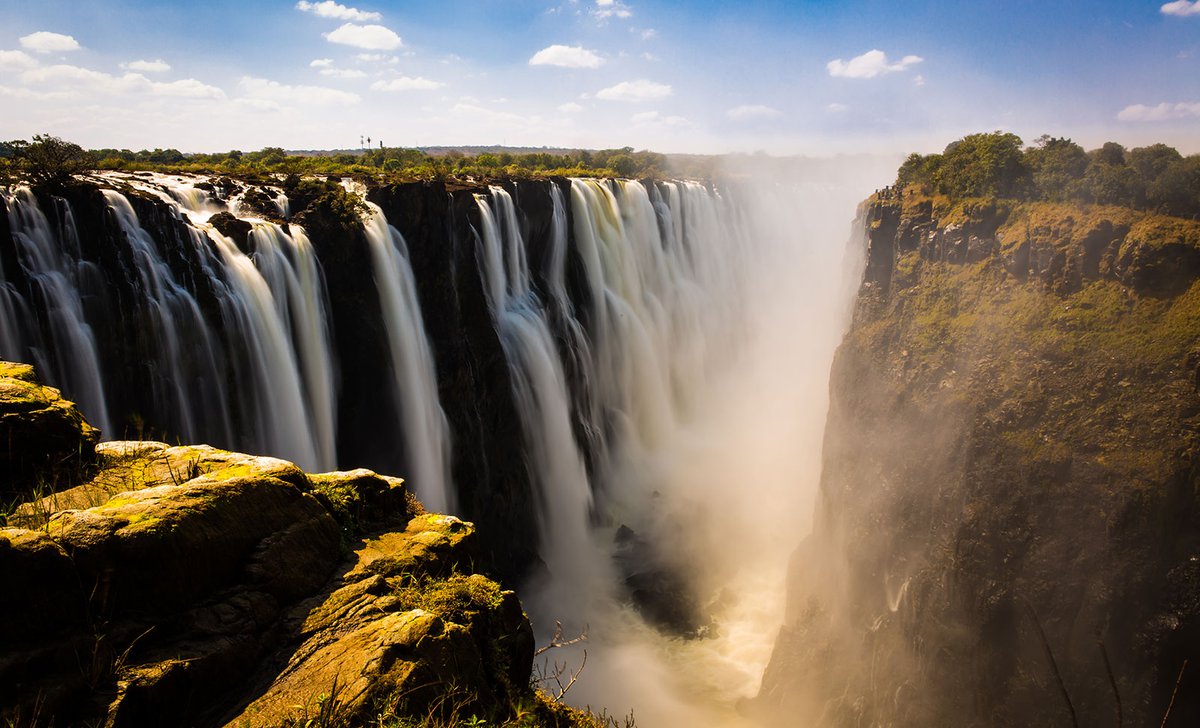